St Barnabas Hospice
Home St Barnabas patient and his wife share their fond memories as they reminisce to celebrate their 65th wedding anniversary.

One of the patients of St Barnabas Hospice celebrated his 65th Wedding Anniversary earlier this year on 18th July 2018. Robert King and his wife and sole carer, Georgina King, share their incredible love story to celebrate their 65 years of happy marriage and adventures.

Both Bob and Georgina were born in London, Bob in Walthamstow in May 1928 and Georgina in Camden Town in November 1931. However, when war was declared in September 1939, Bob was eleven and Georgina only seven. They were both evacuated from London to the countryside. 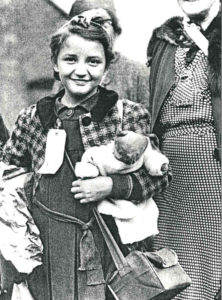 “That photograph is me, only seven with my teddy bear, my label and my gas mask over my shoulder.” Georgina shares.

“I was sent to a tiny village with a young couple and I absolutely hated it, it was deep in the country and I had to leave my mother in London. I was an only child and my dad had been called up to serve in the Army.”

“Both my mum and I hated being separated and this very early period was known as the “Phoney War” and as nothing had happened, I came back to our London flat after only six weeks as my mother and I decided that if we were going to die we should die together. So I stayed in London through the Blitz enduring all the hardships and rationing whilst trying to attend school.”

Bob was also evacuated to the country but stayed away much longer. His house in Walthamstow had bomb damage so his mother joined him and his sister in Bedfordshire and helped to look after the family.

Their story together began when they met at Alexandra Palace “Ally Pally”, the roller skating rink in North London in 1947.

“I do remember our first date actually it was quite funny, we met at Ally Pally but that wasn’t a date as such. I remember Bob mentioning Petticoat Lane Market, and I remember saying to him that “you wouldn’t believe it but living so near to it I had never gone” and he said “Oh come with me on Sunday.” I agreed of course.

“Sunday came and it was pouring with rain so I didn’t go. We didn’t have phones then so I couldn’t let him know. The following week he said that he had turned up and I hadn’t. So he asked if we could try again, now I can’t remember what happened, I think I overslept or something and I didn’t turn up to that one either. I did turn up for the third one. Third time lucky and look at us now.

“The romance grew from there, we got engaged shortly after and got married in 1953, and it was only a small wedding because we couldn’t afford to invite many people with the rationing. We just had a small reception in my parents’ flat in Camden Town. 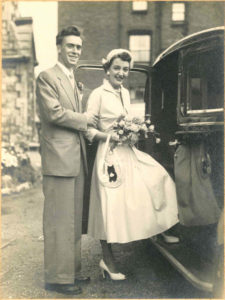 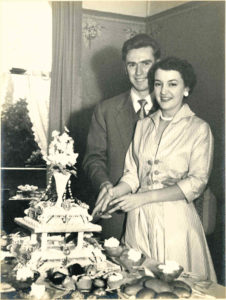 “We moved to our first home, a maisonette in London where we stayed for thirteen years. We only lived seven miles from the West End and we both worked there for many years. Bob was a carpenter/joiner and was employed by a large company and has worked in Kensington Palace and also at large recording studios. I learnt shorthand typing at night school and worked for five years at a big language school in Regent Street, where I was able to view the Queen’s Coronation in 1953 from their Showrooms. Later on I worked in the fashion trade.

“We had a lovely life in London, we both loved the cinema and theatre and as I worked very near to the Palladium I was able to get tickets to see most of the greats of that period who had begun to visit the UK. We were lucky enough to see the likes of Frank Sinatra, Dean Martin, Sammy Davis, Judy Garland. We loved and frequented all the jazz clubs, and saw Duke Ellington band, Count Basie, Louis Armstrong, Ella Fitzgerald and so many more.

“Bob and I moved away from London in 1968 to the lovely Thames Valley near Henley where we lived very happily for over 30 years, both still working as we had no family. I still commuted to London working for a jewelers on Bond Street which had the royal warrant.

“When travelling into London became too tiring I worked in Reading as a personal assistant and secretary to the Chairman of a large company for fourteen year, until I retired (for the first time) at 60. Bob became self-employed and continued to work until the age of 72, when we made the move to Lincolnshire in 2000 where we still live in our bungalow. We then had two cars and a caravan but now Bob is 90 and no longer drives and neither do I as I lost the sight in my right eye in a bad accident.

“Our love for travelling has taken us to many countries and began in the late 50’s when we still lived in London. We had a lovely bright red scooter that we travelled across the continent on. We drove the scooter from London to Rome when some of the motorways were not built. When we lived in the Thames Valley we were close to Heathrow so could do lots of long-haul flights to places like China, Sri Lanka, Borneo, South Africa, India, Thailand, Malaysia, America, I could go on.

“We have so many favourite memories from travelling that I could not pick one.” 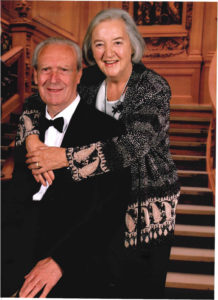 “Unfortunately now at our age and the poor health of Bob, we can’t venture far, but we have had a great life together, with so many happy memories, a great social life in the past with good friends and have been blessed with good health most of the time, so we have no regrets.

About three years ago in 2015 Bob’s health began to deteriorate and he was diagnosed with Chronic Obstructive Pulmonary Disease (COPD). Having a reserved occupation he had worked through the war in a munitions factory. He has never smoked but the pollution from the factory has caused his COPD. Since then he has been diagnosed with cancer of the bladder and dementia.

“We were fortunate to be referred to St Barnabas Day Therapy. We have both attended six week sessions for Easy Breathing, Relaxation and Tai Chi, all of which were very beneficial to both of us. Since then, his health problems have accelerated and I have become his sole carer.

“Fortunately we still have regular contact with all the lovely helpful staff and volunteers from St Barnabas who have supplied him with useful equipment and are a great help to me as his carer. We both look forward to our regular visits and don’t know where we would be without their support.”

Georgina and Bob have lived well, travelled very well and have made an incredible achievement to celebrate their 65th wedding anniversary. Most people can only dream of having that kind of relationship. When asked the secret to their happy marriage they said.

Georgina adds whilst looking at Bob,

“Always remember to laugh together”.