St Barnabas Hospice
Home “When my dad passed away, I thought that getting a Lottery number would be a way of remembering him.”

Trevor Farmer sadly died in 2007 after living with emphysema, a form of chronic lung disease, for several years. His wife, Pauline Farmer, dedicated her life to become his full-time carer but then fell ill herself in 2003 so went into hospital for tests. She had terminal cancer which had spread. She never came home from hospital.

Elaine Jackson, daughter of Trevor and 2007, said, “Dad was completely devastated and along with everything else, depression was added into the mix. Generally, Dad was a very chatty, funny man who loved to share a joke and never moaned, no matter how poorly he was. After Mum’s death though, it was so difficult to lift his spirits. 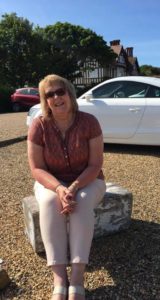 “It was his GP who told us about the St Barnabas Day Therapy Centre on Hawthorn Road in Lincoln and I managed to convince him to go there.

“After only a few weeks he was looking better and beginning to enjoy his time there. He was very proud of some of the things he made and painted, he made friends and he had some lovely meals.

“In turn, he asked me to buy raffle tickets, he joined the St Barnabas Lottery and we bought items for raffles. Anything to try to say thank you for all the care they showed him on his visits.

“When dad passed away, I thought that getting a Lottery number would be a way of remembering him. He would be pleased I still help the Hospice in some way.

“The work the Hospice does is simply wonderful, whether it be the nursing care in the Hospice or the staff who work in the Day Therapy buildings. Both my dad and I were so well supported, and it was a relief to know how well he was looked after. The Hospice lifted his spirits and gave him a purpose once more.

“I only wish we had known about Mum’s diagnosis sooner, so she could have experienced the same level of care in her last few days or weeks.”