“Many people have probably met my mum, often without even knowing it. She was probably that woman that wouldn’t shut up in the queue at Starbucks, or she might have started chatting to you at the bus stop and didn’t stop until you got off the bus half an hour later. My mum, Carolyn, could fill any room with her voice and she certainly had a lot to say. She always busy doing something, whether that be out for afternoon tea, people watching or spending a Saturday night at the Jail House Rock Bar in Lincoln! Tina Turner – Proud Mary was her song of choice. She always had to visit every new restaurant or cafe before anyone else, just so she could let us know her thoughts first. 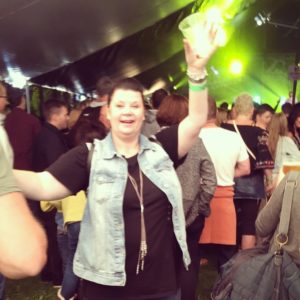 Mum was diagnosed with breast cancer six years ago. This didn’t change her at all, she still wanted to get out and see people. She went through eight rounds of chemotherapy, a mastectomy and two weeks of radiotherapy. Cancer treatment has some funny after affects and she struggled with tinnitus which led her to leave her job at TK Maxx due to anxiety. We all agreed, whatever was right for her was right for us too. She went into remission for five years and I treasured the time I had with her. We spent weekends together having afternoon tea, drinks in local pubs or walking the dog. We were best mates.

March 2019 came, and Mum had some issues with dizziness and using her right arm. She knew something wasn’t right and saw the doctor who prescribed some tablets, but it was still a problem. I suggested seeing the optician as her glasses might be causing the problem. They scanned her eye, found there was something pushing against it and referred us immediately to hospital. After an MRI scan, we found out that Mum had a brain tumour on her motor neuron strip. This is why she was losing the use of her right hand.

In April, Mum went to Queens Med and had the tumour removed successfully with follow-up radiotherapy. She had spent five years growing her hair back after chemotherapy and was then told she would lose it again due because the radiotherapy was on her head. My amazing family and friends raised money for Mum to get a real hair wig for my wedding in the August and she was overwhelmed with the support. 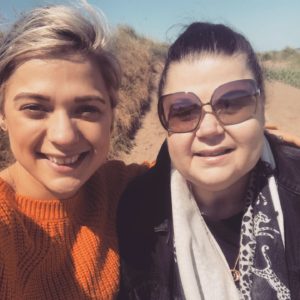 All through this, Mum remained her positive, super chatty self and still got out and about on the bus because the brain surgery meant she couldn’t drive for a year. We planned my wedding and got my dress together and it was all going great! My wedding came around at the end of August, but Mum wasn’t herself and had been off food for a few days. She powered through like the amazing, strong woman she is. I look back at my wedding day and know she was doing all she could to be there! She was full of pride. We had a post-wedding holiday to the Lakes, and when we got back Mum was excited to see us but was feeling really poorly. Dad wanted to take her to the doctors, but she was very stubborn and refused to go. The pains got worse and Dad ended up calling an ambulance.

A week later and our lives were dramatically changed for the worst. Mum was admitted to hospital for three weeks and there was a lot of confusion as to what was wrong with her. She started fall in and out of consciousness and could hear us but couldn’t really talk. We were told mum had cancer which had spread to her liver. She had weeks, possibly days to live. I’m still not sure if mum ever knew this.

From this point St Barnabas stepped in.

They assessed mum for referral to the Hospice and said they could get her in before the weekend if we wanted. They invited us to go and have a look around and we just knew it was the right place. It was quiet, private, and lots of friendly nurses were on hand. Mum was moved there that night and I travelled in the ambulance with her. 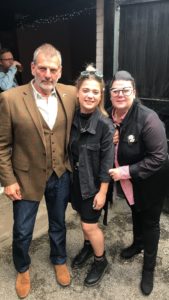 The Hospice was amazing. As soon as we arrived we spoke to a doctor who was honest with us, but also offered care and support. The nurses made Mum more comfortable straight away. They washed her and put her own clothes on. The biggest thing I remember is the mouth cleaning kits. These cost the Hospice £30 a piece, but I am so grateful that people’s donations have enabled them to exist for patients as Mum hadn’t been drinking and her mouth looked sore and uncomfortable. This kit must have made her feel so much better. When we came back in she looked much more peaceful and pain-free. The doctors were able to manage Mum’s pain and listened to us when we told them we thought she was struggling. The nurses set up camp beds in her room for us and we could come and go as we pleased. There were endless cups of tea and coffee, and food if we needed it. They also offered us rooms and showers which are there especially for visitors.

Sunday 6th October, a day I will never forget. Mum was 53-years-old and had put up a good fight for three days in the Hospice. My dad, brother and I had stayed in the room with her the night before and the nurses said we all looked so peaceful and Mum didn’t stir. It was when they had to move her and change her that Mum couldn’t cope so well, but we were all there by her side. This was all made possible by the amazing care that St Barnabas offered in Mum’s last days. They supported us with a hug or a kind word. The nurses would come and talk to Mum as they said she could still hear us. We would tell them funny stories, and what she was like.

On Saturday 25th April 2020, I, along with seven of my closest friends, had organised a sponsored bike ride from Lincoln to Skegness in Mum’s memory. We called it Tour de Queens as my mum was a queen in all our eyes. Sadly, we had to postpone this challenge due to the coronavirus pandemic. We knew how difficult it was going to be for St Barnabas to fundraise with all their events being cancelled, so we decided to do something a bit different and help them out in their time of need, just like they helped us in ours.

We jumped on the idea of the 2.6 Challenge and between us, did the following over the course of the weekend:

The weekend was then rounded off by a Sunday Zoom quiz, with the dressing up theme of ‘queens’! With a £5 entry fee from each person, we managed to hit our fundraising target before the proper bike ride had even started. 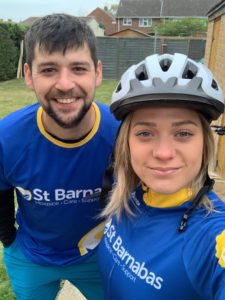 We won’t be stopping there though. Once social distancing measures have been lifted, we still plan to undergo our bike ride from Lincoln to Skegness. Skegness was Mum’s favourite place and she will be with me the whole way there. Skegness is also significant to our family because Mum paid for a family weekend away there, which I thought was for my birthday. It turns out that she had planned it with my partner, Blake, so he could propose to me! The ride will take us on a 40-mile route through the Lincolnshire Wolds and we are now aiming to raise even more money for such an incredible charity.

If anyone can sponsor us, we would be truly grateful. Just visit www.justgiving.com/fundraising/tourdequeens”