Six family members have signed up to the St Barnabas Inflatable Colour Dash in memory of late father, John White

A family from Caythorpe has come together to run the St Barnabas Inflatable Colour Dash on Saturday 12th May, in memory of the late John White.

John was a much loved father, grandfather and husband to Emma Framingham, Jason Framingham, Ned Framingham, Sienna Sullivan, Amber Sullivan and Maureen White, who are aged between 11 and 71 and will be taking part in this year’s Inflatable Colour Dash. 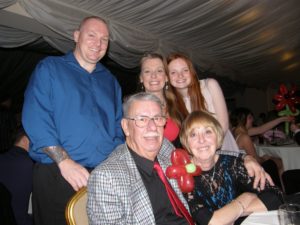 Emma, John’s daughter, works for the headline sponsor of the event, Western Power Distribution. There will also be around 20 of Emma’s colleagues taking part in the Inflatable Colour Dash alongside the family. Emma said:

“I was first made aware of the Colour Dash in 2016 through work, as it’s an event we sponsor. St Barnabas is a great cause, so my daughter and I took part in our first Colour Dash that year.

“When the time came around again for the 2017 Colour Dash, we both had no hesitation in signing up again as we had so much fun the year before.

“Never would we have imagined when we did those runs that we would be using the St Barnabas facilities the next year when Dad fell ill.”

John spent time at the St Barnabas Hospice in the Hospital in Grantham for just over two weeks in January 2018, and he sadly died from lung cancer which spread to his bowel on 29th January 2018.

“The care Dad received from St Barnabas was simply phenomenal, and my mum described it as a weight being lifted from her shoulders the moment we walked through the door.

“Everyone from the cleaners and the volunteers to the doctors and nurses were just amazing, from chatting with my dad and making him laugh while he was able to, to making us all feel welcome and reassured with everything that was going on.

“The nurses were so lovely to my eleven-year-old daughter, Sienna, who was worried about going to see her grandad as he was so poorly. They helped her to understand what was going on, and it meant a great deal to her to be able to spend time with him in such a lovely environment.”

John was originally from Brighton, and spent his youth riding his scooter! He joined the RAF aged 18 and was often on Royal Detachment, serving members of the senior royal family. After his time in the RAF, John moved to Caythorpe to run the Red Lion pub, where he settled down to family life. 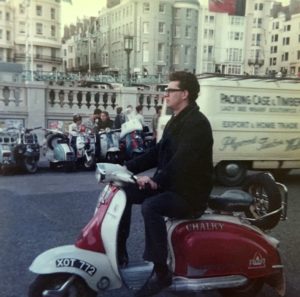 “Dad made it very clear that he was very proud of us all, and I am sure he’d be bursting with pride that we are doing this for him.

“We raised almost £300 for St Barnabas at Dad’s funeral, and will definitely be doing more fundraising for the Hospice in the future.”

If you have any questions about the event, contact Laura Stones, St Barnabas Event Fundraiser, on 01522 559 515 or email laura.stones@stbarnabashospice.co.uk.