Rachael Bradley from Grantham, 44, was diagnosed with grade 3, stage 2 DCIS breast cancer on the day of the first lockdown in March 2020.

Not only did she survive her cancer, but she has also set up a local support group for those affected by breast cancer and was recently chosen to carry the Queen’s Baton Relay through her hometown.

After her diagnosis, Rachael publicly shared her cancer journey from start to finish, the good, bad and the ugly. During this time, Rachael had several forms of treatment; lumpectomy, six rounds of chemotherapy, 20 rounds of radiotherapy and 18 rounds of dual HER2 therapy.

As a result of chemo, her hair started to fall out, which made her decide to raise money for MacMillan by shaving her hair off live on Facebook with target of £500. By the end of the shave, just under £4,500 had been donated.

Rachael co-founded the peer support group Breast Friends in June 2021 with friend Sara Green, who is also a breast cancer survivor. They decided to set this up due to lack of local support groups for those who have been affected by breast cancer. The group is now flourishing with around 110 members, including male members, who meet up regularly as well as sharing their joys, sorrows and questions in the Best Friends Facebook group. 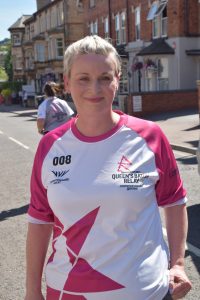 Rachael is a much-loved campaigner for breast awareness and cancer in general throughout the region, and also works for the tenancy services team at South Kesteven District Council.

For her hard work with Breast Friends, she was nominated by her colleagues to be one of the baton bearers for the Queen’s Baton Relay – a journey which brings together and celebrates communities across the Commonwealth during the build up to the Commonwealth Games in Birmingham, which starts on 28th July.

Karen Bradford, Chief Executive at South Kesteven District Council, said: “Rachael is an inspiration to us all and we are very proud to have such a caring person in our team. She thoroughly deserves this recognition, and we all supported her on such a momentous occasion.”

Rachael held the baton with pride on Monday 11th July 2022 and completed the route from National Primary school to the top of Castlegate, Grantham.

To get in touch or find out more about the Breast Friends group, email breastfriendsgrantham@gmail.com or search for Breast Friends Grantham on Facebook.