Tim, age 49 from Lincoln, was diagnosed with terminal pancreatic cancer in June. Upon talking to Tim about his Advanced Care Plan, staff at St Barnabas Hospice discovered his love of football, in particular Lincoln City FC, and decided to get in touch with the football club.

“When I spoke with Tim and his family about what matters to him, it became really obvious that football was one of his lifelong passions – specifically Lincoln City Football Club.

“He had attended matches with his father since he was five-years-old and both himself and his son are still regular attendees at every match.” 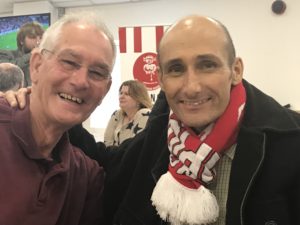 “The football club have been so overwhelmingly kind in helping us to sort out such a special experience for Tim and his family and I can’t thank them enough for going the extra mile.

“We have been working closely with Lincoln City FC over the course of the year as one of their Charity Partners. It has been wonderful to build relationships with both the club and their supporters and has given us a great opportunity to further raise awareness of the work we do across Lincolnshire.”

Tim had initially thought he would be attending Thursday’s press conference to meet Harry Toffolo and Danny Cowley with his family and good friend, but he was surprised further when Harry organised for the squad to come and see him. This resulted in Lee Frecklington inviting Tim to lead the squad out of the tunnel during Saturday’s game vs. MK Dons. Danny Cowley took things a step further by arranging a whole VIP day for Tim and his guests, including meeting the squad in the changing room before the game, match tickets, VIP lounge access, the chance to sit in on the post-match press conference, photos with the Checkatrade Trophy and drinks with the manager. 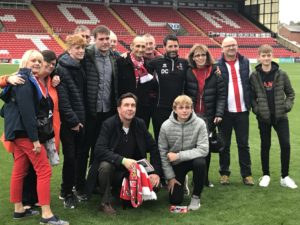 When talking about the win during the post-match press conference, Danny Cowley said:

“That was for Tim Smith. We met him on Thursday and [his story] really touched all of us. We were really determined as a group to get a win for him and it felt right.

“It was a pleasure for us to have Tim and his family with us and it felt really special before the game.”

“The care at St Barnabas has been second to none. Mary, Caroline and their team have all been magnificent.

“It’s sad to say, but it’s not until you need them that you realise how important this organisation is. The Hospice at Home girls just can’t do enough for me. They’re lovely, genuine people.”

St Barnabas cannot thank Lincoln City Football Club enough for the time they have taken to ensure Tim’s final wish has come true. The Hospice is now looking at ways of working more closely with the Club to support the wellbeing of staff and fans.