Lindum 1st XI will play host to Spalding 1st XI in a Lincolnshire Premier League fixture, with all proceeds from the day being donated to the charity.

St Barnabas is a local independent charity, supporting more than 10,500 people each year across the county affected by a life-limiting or terminal illness.

The idea was inspired by Sydney’s Pink Test and the Red For Ruth Test at Lord’s, at which supporters, players and sponsors have come together to help raise awareness of the campaigns and to support fundraising for the McGrath Foundation and the Ruth Strauss Foundation respectively.

Lindum will be looking to replicate this on the day; a lot of the club’s in-ground branding will be turning yellow. Supporters are encouraged to come along and wear something yellow to show their support, with an optional donation on entry.

With the support of platinum partners CPC Civils and TNF Cricket, players from Lindum will wear special shirts and caps to mark the occasion.

The initiative follows the success of the floodlit cricket tournament at the club, which has seen them raise in excess of £7,000 for local charities.

Based on St Giles Avenue, a short walk from the city’s Bailgate area, Lindum Cricket Club offers cricket for all ages, genders and abilities, with junior cricket from age 5-19, a ladies team and 5 senior men’s teams. 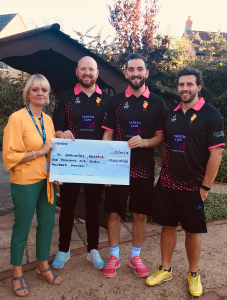 Will Taylor from Lindum Cricket Club said: “We are delighted to be able to continue our support for the Hospice this year in a slightly different way than we have seen previously. With the rising costs associated with the floodlit tournament, we have had to park that for the foreseeable, although we are hoping to see it return at some point.

“Cricket fans will be familiar with the idea we are trying to emulate with the aforementioned matches. Ultimately, we want everybody and anybody to come along and enjoy the cricket whilst simultaneously supporting the club and the charity and making a real difference to a worthy cause.”

Caroline Swindin, Fundraising Development Manager at St Barnabas added: “We are delighted that Lindum Cricket Club have chosen to support us again; especially in what is our 40th Anniversary year and we look forward to seeing the club `Go Yellow’ in support of Hospice care. The day is open to all, we hope to see lots of people coming along and joining in the fun and sporting something yellow!”

You can support the event by attending and wearing something yellow, as well as following the club or the charity on social media and sending in your pictures using the hashtags #GoYellow and #UTL.

The match begins at 11:30am on Saturday 30th July at Lindum Cricket Club (LN2 4PE), where the bar will be open with food available. Supporters are encouraged to bring their own seating and picnics are allowed.