St Barnabas Hospice
Home Julie Fisher, takes on the Toubkal Trek in memory of her husband Chris Swift aka ‘Swifty’

Julie Fisher is about to embark on a life changing challenge as she will join other daredevils who are going to Trek Toubkal, North Africa’s tallest mountain, all in support of St Barnabas Hospice. Julie is doing the challenge in memory of her husband, Chris Swift

“Chris ran his own company Swift Renovations, he was a retained fire fighter for Wragby Station. He loved the outdoors, we went walking as a family, his favourite place was a tarn in The Lake District called Small Water. We scattered his ashes there.” 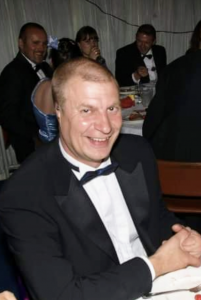 “Chris had a thirst for life and fun with a witty humour and enjoyed playing pranks on people, always with a smile on his face. He had a very special quality of being able to inspire people and always had a word of wisdom for anyone he spoke to. He was a honest, genuine and straight talking guy who had a big impact on all the people who knew him. His two boys, Jacob and Reuben meant the world to him.

“Chris was first diagnosis in January 2001 with Malignant Melanoma and had to have his ear removed. Jacob and Reuben were only 7 and 5. We thought it had been caught but it had been laying dormant for 9 years and in January 2010 it returned, at this point we were told it was terminal.

“The hardest thing was to tell Jacob and Reuben that their dad hadn’t got long to live. We wanted to involve them and let them know we needed to make the most of what time we had left with him. Chris was determined to fight the cancer, for as long as could as he so wanted to watch Jacob and Reuben grow up. He made the decision to have Chemotherapy and had to travel to Leicester every three weeks, for four days of treatment. It was tough going, but he never gave in. The cancer spread to his femur, which he had pinned, then his lungs and finally his brain which was devastating as he was unable to communicate with us.” 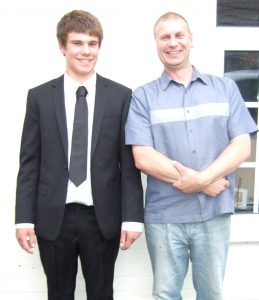 “Chris’s wish was to be cared for at home, so he could spend as much time with his family and he didn’t want to be a burden to anyone. I did manage to take care of him at home at first, but found it very difficult once the cancer spread to his brain. At this point the St Barnabas nurses came into our home daily and overnight to help me with his care and to give us support. I remember how kind, caring and patient they were with Chris, and the support they gave me was incredible. I really would not have managed without them and Chris would have had to go into hospital/care which he didn’t want.

“Because Chris was at home it was so much better for Jacob and Reuben as they were able to pop in and out of his room day or night to see him without having to travel to Lincoln. If Chris had not been at home the three of us would not have been with him when he died which would have been even more devastating. 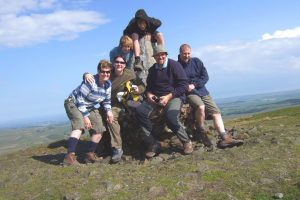 “I asked Jacob and Reuben if they’d do this fundraising challenge with me. I thought it would be an excellent way to mark 10 years since Chris died (now 12 because of Covid), because he would have loved to have done this Trek.

“Because the boys were so young when their dad died, I think it’s very important that we do different events together in his memory. We want to keep supporting St Barnabas Hospice so they can continue to give others the excellent care they gave us.”