John Marshall will be supporting this year’s St Barnabas Colour Dash Fest in memory of his ex-partner.

Join John Marshall, Lincs FM Presenter, and St Barnabas Hospice on Saturday 16th May for the return of their popular Colour Dash Fest at the Lincolnshire Showground. The Colour Dash Fest features an untimed fun run featuring coloured paint stations at each kilometre where Paint Pirates will shower participants from head to toe as they go past. Participants can choose to run either 5k, 10k or 15k. 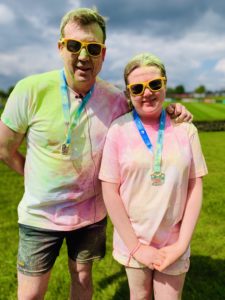 John took part in last year’s Colour Dash whilst his ex-partner and daughter’s mum, Angela, was being cared for by the Hospice. Last November, Angela sadly died in the St Barnabas Inpatient Unit and John will now be running the Colour Dash once more in her memory.

“Angela was 49 when she died, but her diagnosis came five years prior to that. She was hoovering one day, thought she had pulled a muscle in her chest and went to get it checked out.

“By the time Angela was seen at the Hospital she had established in her head that it was breast cancer, and unfortunately, she was right. She had a lumpectomy, which appeared to be a success and at that point no more treatment was necessary. But as time went on more complications arose.

“A year or so later she has more issues with lesions. They had to do another operation which involved removing a lot of muscle and lymph nodes. After that she had big problems with lymphedema in her arm. Angela was in a lot of pain and with that the diagnosis went from treatable to “we can’t do anything more to help you”. This was nine months before Angela died.

“At this point Angela was referred to St Barnabas Hospice for respite care. She went into the Hospice several times and was able to return home stronger. There were times that she went into the Hospice and I didn’t think she would come back home again, but within two or three days she was sat up in bed, relaxed and comfortable.

“I think a lot of people’s opinion of the Hospice is that it is a place you go to die. It was a lesson to me, Angela and our daughter Eleanor – we had no idea you could visit for support and symptom relief. When Angela first went in there, I was frightened, and I know Angela was too. But we quickly realised that it could be a place for her to rest and leave stronger. We used to think of it like a 5* hotel because the food was great, and the attention and care was nothing short of fantastic. 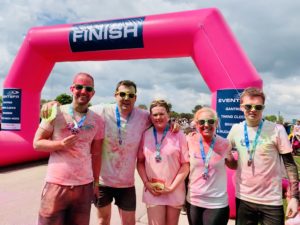 “I’ll always remember the support Annie and the other nurses gave Eleanor. Especially when we were told that the end was close for Angela and there was probably one night to go. Eleanor asked if she could stay by her Mum’s side, so they set up a double bed right next to Angela’s bed. Eleanor was able to lay next to Angela for the final night, holding her hand and chatting to her until they fell off to sleep. She said to Angela “wait for the morning Mum.” Angela wasn’t conscious, but she did wait. It was 7.20am when she died with Eleanor by her side, still holding her hand. If it had to happen, it couldn’t have happened in a calmer way and that’s down to the people at the Hospice providing outstanding care.

“When Eleanor and I left the Hospice for the final time it felt like we were saying goodbye to friends. They had been caring for Angela, and us for a long time and it was an emotional goodbye.”

Tickets are now on sale for the 2020 Colour Dash. Limited early bird tickets are priced at: