St Barnabas Hospice
Home “Sam would say “love you Mum, in my heart” to me hundreds of times a day before he died, and that’s why the Forever in our Hearts appeal really spoke to me.”

Christine Newby has dedicated an ironwork heart in memory of her treasured son, Sam, who had a wonderful and fun-filled life before he sadly died in December 2021 from pancreatic cancer. She has chosen to share his story in the hope that it will encourage others to remember loved ones in such a beautiful way. 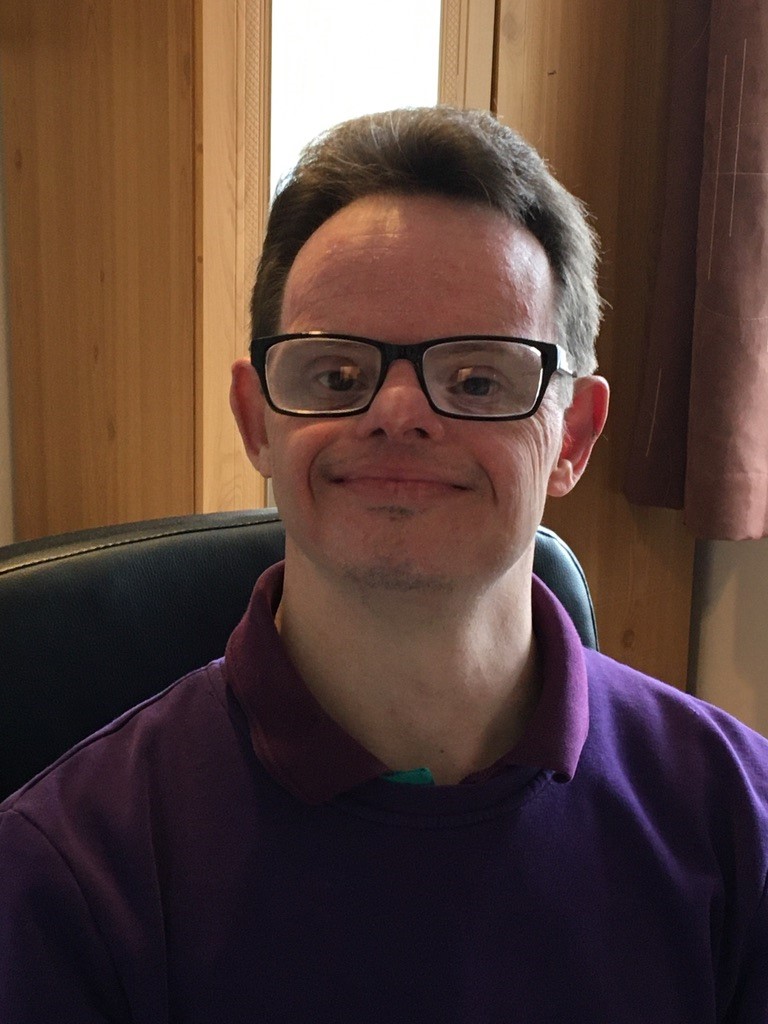 Christine said, “Sam was born in Hong Kong in 1978 with Down’s Syndrome. After falling in love with him at the Home of Loving Faithfulness, my husband and I had the privilege of adopting him, moving back to the UK together four years later.

“When he was born, Sam had duodenal atresia which could have been fatal, but miraculously the doctors were able to keep him alive. The scar from his operation went from hip to hip and he would always refer to it as his tummy zip, pretending to undo it when he had eaten too much!

“My husband and I travelled a lot with work, so Sam had homes in Hong Kong, UK, Sultanate of Oman and Saudi Arabia, He also visited his sister in Australia on many occasions and was a proud uncle and great uncle.

“Sam had an enormous sense of humour and just loved to make you laugh with and at him. He told many jokes, but usually the punch line came at the beginning! Once he learned to speak there was no stopping him; as soon as he opened his eyes in the morning, he also opened his mouth.

“Sam would say “love you Mum, in my heart” to me hundreds of times a day before he died, and that’s why the Forever in our Hearts appeal really spoke to me. We intend to place our heart beside his grave in the churchyard.

“We still like to talk in the way that Sam would, and he had his own way of speaking that others sometimes couldn’t understand. We still say ‘bish bosh’ for dishwasher, ‘blips’ for slippers and ‘nuff nish bop’ for enough, finish, stop when Dad would tickle him.

“HimToo was a very important part of our family – a stuffed rhinoceros which Sam had from his third birthday. He had many repairs over the years – new paws, new horns, new tail – but he was always there beside Sam whatever he was doing. He got his name because Sam would always say “me bwing him too?” when we went anywhere.

“Sam was diagnosed with terminal cancer on December 7th after spending just two days in hospital. The doctors had found secondaries in his liver, bile duct and lymph nodes, so he was in terrible pain. He went downhill so fast and was moved to St Barnabas Hospice in Lincoln just ten days later.

“He died in the early hours of 20th December, which rocked our whole family. We are still feeling the shock even now.

“HimToo went with Sam to the Hospice and stayed with him right to the end. It seemed only right that HimToo joined Sam on his last adventure in the coffin, watching over him in his place of rest.

“All of the staff at St Barnabas were simply wonderful, asking if we needed anything and keeping an eye on all of us, not just Sam. The care they showed him was outstanding, and even though he arrived there on strong pain relief, the nurses still managed to get to know him a little.

“He passed so suddenly that we weren’t able to get to the Hospice in time, but we felt so grateful to the nurses when we got there because they had got him looking so comfortable, cuddling his favourite toy, HimToo. They had placed little dinosaurs around his head too – all so very caring. The nurses held onto us and it felt like they were our family in Australia who we were so dearly missing.”

Christine’s story highlights just how important the Forever in our Hearts appeal is for helping families remember loved ones in such a beautiful way. By donating for an ironwork heart, you will be directly helping the Hospice to support more patients just like Sam. Visit www.stbarnabashospice.co.uk/foreverhearts to order yours today.